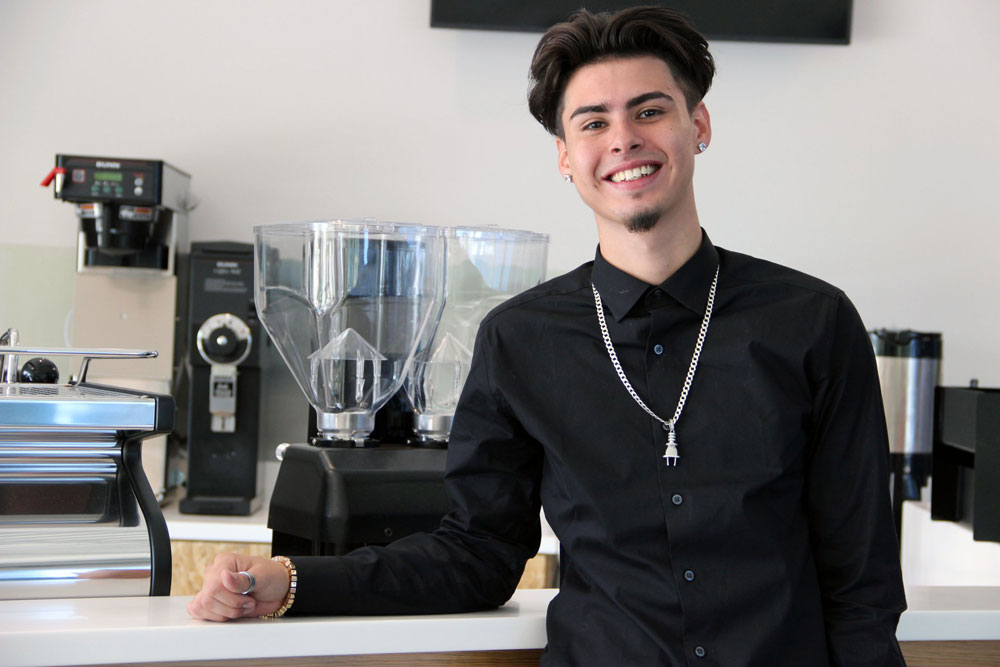 “Today, I understand the role I play as the older brother of seven,” said Julian, “if you asked me that a few months ago, I wouldn’t have been able to express what that looked like or meant to me.”

Julian Mena, who was raised by a single mother, hurtled through many hardships as he took turns establishing his childhood between San Antonio and Houston, Texas.

“As a young child, I didn’t feel like I had a set path for myself,” said Julian, “lacking a father figure, I longed for stability and I tried to find comfort in the people around me; the people I called “friends” at the time, didn’t help to steer me in the right direction.

“Without even really noticing it, going back and forth between cities really had a negative impact on me.”

“The only thing I knew for certain about school was that I’d been to six different high schools between the two cities,” said Julian, “I was a good student, but my attendance and interest started to wane when I took after the wrong crowd. I was 16 then.”

“I often found myself struggling on the other side of the law,” said Julian, “I was lost in the depths of my consciousness fighting against drugs and many other bad influences. I got into activities that weren’t too favorable for a 16-year-old.
“But my mom helped me through. She’s my rock and the push I needed. Even when I couldn’t recognize myself, she helped me find the will I had buried deep within me to go on.”

As a younger brother began to emulate him, Julian realized that he was the role model his brothers and sisters looked up to. And, upon that realization, Julian decided to turn his life around.

“When we got the opportunity to move to Houston, I saw that it was my chance,” said Julian, “and I cut off ties with the “friends” that weren’t taking me anywhere. Being in Houston offered me a chance. I felt that I was finally going to be around the right people. That’s when I found SER.”

Upon discovering SER in April of this year, Julian immediately enrolled in the YouthBuild program with his mom’s full support and encouragement. YouthBuild Houston is a GED program that SER offers the community’s youth and young adults (17-24 year-olds) who have dropped out of school. Students can earn their GED while gaining skills in construction, earning a stipend and helping to rebuild and repair housing in low-income communities.

When asked about his hunger for change and the drive to join the program, Julian said, “I wanted to finish high school. I think it meant a great deal for me to see this opportunity through for the sake of my brothers and sisters. Taking that first step and opening myself up to what’s out there really changed my outlook on my role as a brother.

“I wanted to do right by them, be the ‘inspirational big brother’ that I realized I could be. So I began to change the way I talked around them. That’s what the program offered me.”

“It was a great experience, I was excited. I felt like the schools I went to before didn’t care whether or not I graduated,” said Julian, “they were just getting kids in and out the door. I’ve been to many schools, and I know this experience was different.
“I found my mentors here, they made me feel… like they cared. Mr. Sweeney, Mr. Green, Ms. Bennett,  Ms. Zully, and Mr. Lee took it upon themselves to reach out and make sure I didn’t give up on myself until I saw this program through.”
“It’s amazing!” said Julian, “I have this newfound confidence in school. There is friendly competition here, it’s something great because we lift each other up.”

“Before the YouthBuild Program, I remember just wanting to get by,” said Julian, “afterward, I’m thinking what’s next?”
“I’ll be working at La Chamba, which is going to be a huge stepping stone for me,” said Julian, “and now I want to go to college and I’m even considering a career as an electrical engineer.”

La Chamba Café + Careers was founded by SERJobs as a community hub where employers and job seekers could connect and build careers in a coffee shop environment. It’s located in SER’s Workforce Opportunity Center at 1710 Telephone Road and has its grand opening on September 18th.

Julian feels he found himself and his potential through YouthBuild and has advice for others his age who are struggling, not knowing what to do with their lives.

“I would definitely say to give it a shot, it will take you beyond the mentality of just getting by,” said Julian, “I feel like SER opened so many doors for me. Look at me, I did it!

“I would tell others to get it done now. You can get it as fast as you want it, let your drive and the SER team take you forward.”
“I’ve learned a lot, being here; it’s a well-rounded program,” said Julian, “and I can say I walked away with mentors, peers, and a vision for myself down the road.”