SER/Fresno recently purchased Royal Heights, a 120-unit apartment complex located in the San Diego area. All the units are two and three bedrooms, two bath, with laundry hookups.
The purchase closed on March 31, 2016. The complex appraised at $18 million. SER, as the managing general partner of the complex for the past 15 years, purchased the property for $10.6 million. SER used its senior housing project in Fresno, Las Casitas de SER, as collateral to assist with the purchase. Royal Heights generates $1.5 million in rental income and has an operating budget of $1 million leaving a net operating income (NOI) after expenses of approximately $500,000 annually.

SER also purchased Emerald Gardens, a 16-unit townhome apartment complex, which closed January 1, 2015. All the units are two, three, and four bedrooms including two bath.
Emerald Gardens appraised at $3.5 million and was purchased for $1 (yes 1 dollar). After fifteen years of being the managing general partner of this project, SER negotiated the purchase from the National Equity Fund (NEF), its non-profit limited partner. Emerald Gardens generates $180,000 in rental income and has an operating budget of approximately $110,000 leaving a NOI of approximately $70,000 annually.

SER/Fresno has been awarded a $387,945 grant for the first budget period (7/1/16 through 6/30/17); the grant will be for a total of five years. The grant is to assist students who are engaged, or whose parents are engaged, in migrant and other seasonal farm work to obtain the equivalent of a secondary school diploma and subsequently to gain employment or be placed in an institution of higher education or other postsecondary education or training. This program will serve 100 individuals in the cities of Guadalupe, Lompoc, and Santa Maria in Santa Barbara County. The objective is to graduate 69 students and place 55 each year. This is the third HEP grant funded to SER/Fresno through the U. S. Dept. of Ed; the others are in Fresno (funded since 1999) and Imperial Counties (funded in 2015).

SER/Fresno was also awarded a $136,909 grant from Marin County Area Agency for Aging for the first budget period (7/1/16 through 6/30/17); the grant may be refunded for an additional three years. The grant is to serve 12 seniors that are eligible to receive Title V Senior Community Service Employment Program services in Marin County. This is the fifth SCSEP state grant that we have received through the Area Agency on Aging; the others are in Alameda, Fresno, Stanislaus, and Ventura Counties. 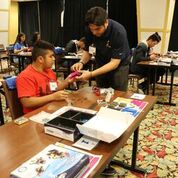 The SER Robotics Program is designed to enhance students’ Academic, Technical, and Leadership skills in order to attain educational success. The Robotics Program is intended to stimulate the interest in Science, Technology, Engineering, and Mathematics (STEM), and Art. The goal is to encourage students to attend college and pursue STEM/STEAM degrees.

This program will stimulate students’ interest in STEM/STEAM by hands-on Science and Engineering activities and through a variety of conference motivational speakers. The program will introduce students, beginners through expert, to the exciting world of Robotics through building, designing, modifying and testing robots.

Students were provided a kit to build a robot. This first robot was the seed for their individual creativity. Each student, upon completion, had a chance to test their robots in an Arena. After, students competed with their robots in groups of 2 to 8 robots.

Student applied basic Physics and Engineering, to improve their Robots and tried to make them stronger, faster and more robust.

Each student designed their own Robot and presented it to the other teams in a highly interactive manner.