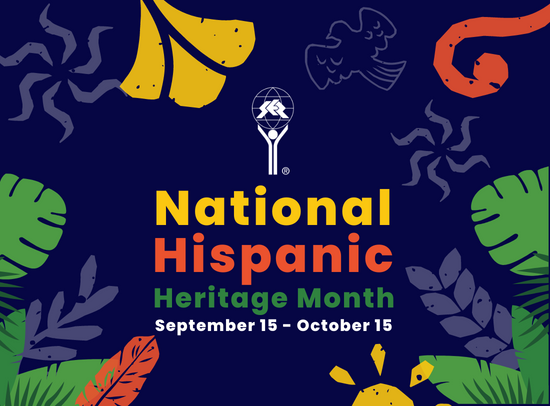 Hispanic Heritage Month begins this week. For the next four weeks, various events and festivities highlighting Hispanic culture, business, and issues are planned throughout the United States. The annual month-long tribute to all-things Latino is the single largest Hispanic cultural event in the country. The idea first became a week-long happening started by President Lyndon B. Johnson in 1968. Twenty years later, President Ronald Reagan expanded the observance to an entire month by passing a law enacted on August 17, 1988.

“Hispanic Heritage Month is an essential opportunity for all Americans to explore and discover the many positive ways Latino men and women are adding to the vibrancy and character of our nation, and with good reason,” says Ignacio Salazar, SER National President & Chief Executive Officer. “Today, one in five persons in the United States is Latino, with a growth rate of 23% since 2010. As importantly, we are becoming a significant part of the fabric of every community where we live. This assimilation includes strides in speaking English at 72% to advance in their jobs or business. At the same time, many immigrants still honor the tradition of speaking Spanish at home among family and friends. Also, four out of every five Latinos in the United States are US citizens, with roots going back four or five generations. We’re veterans, teachers, business owners, professionals, creatives, and so much more. We are the very image of America today,” adds Salazar.

Hispanics are contributing a significant and increasingly larger portion to the US economy’s total strength. This is because, as the single largest demographic, 25-and-under, Latinos now represent a combined spending power of $1.5 trillion annually. Plus, Hispanics pay nearly $400 billion in taxes yearly, representing the most significant single payors as a percentage of income. Their most considerable single tax contribution is to the US Social Security system, where Hispanics account for more than $210 billion annually, a critical boost to the program’s longevity. All these economic indicators for Hispanics are trending upward as more Latinos increase their education. Nearly 15% of Hispanics now have a college degree. Notably, almost 3 million Hispanics are small business owners, more than a third more likely to be entrepreneurs than the entire US population.

“From Hollywood’s box office to the ballot box at our neighborhood polling place, our presence is also being felt,” says Salazar. “Out of 252 films and streaming services studied, a large percentage of revenue came from communities of color, especially Latinos, for six of the top 10 grossing films. Similar trends are being seen in Hispanic voting power, where this year, a milestone of 35 million or greater Latinos will be eligible to vote. Indeed, this is an exciting time to be an American and see the future take shape right before our eyes of a more diverse, stronger nation working together,” says Salazar.