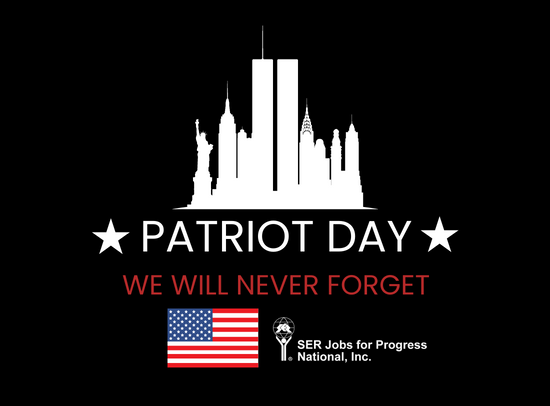 Nation’s Service-Employment-Redevelopment Network Pauses to Remember and Celebrate the Lives of the 2,977 Victims Lost at Three Sites On That Fateful Day

SER National is paying its respects to the men and women who perished in the terrorist attacks on our nation on September 11, 2001. America was struck at the World Trade Center in New York City, and at the Pentagon in Washington, DC in two separate acts of violence where passenger jets were used as missiles by hijackers. The third site where American lives were lost is located in Somerset County, Pennsylvania, near Shanksville where United Airlines flight 93 crashed as passengers attempted to retake control of their plane from members of the same Al Qaeda cell.

“We still mourn the nearly 3,000 mothers, fathers, sons, daughters, brothers and sisters whose lives were taken in the single worst attack by an enemy on American soil,” says Ignacio Salazar, SER National President & Chief Executive Officer. “Today, more than two decades later, we can still remember vividly the images of destruction and chaos in our nation’s largest city, the charred scene at the heart of our country’s military leadership complex, and the scarred earth ripped open by a plane that was brought down when brave Americans fought back courageously,” adds Salazar.

Yet, as painful as 9/11 was and shall always be seared into our very souls, our nation is comforted by the outpouring of love and support that continues to be shown for the survivors and families of those men and women who died. Also, the children of 9/11 who are now grown speak with bittersweet pride of their first responder loved ones who made the ultimate sacrifice as they rushed back into harm’s way in the twin towers. And yes, there are those who suffered in the arduous aftermath of 9/11 recovery for whom medical care and assistance came too late and we have learned much about how to do better. Indeed, our lives changed on that day, and all of us have been touched in one way or another.

“On this 21st anniversary of that tragic day, Americans can recommit to the principles of unity and resolve that we witnessed in the days following the attack. While the economic losses of 9/11 are known in places like New York City, the greater toll America suffered was the fear and distrust of the ‘other’ the attacks engendered. This is where each of us can have a role in our daily lives. We can and must reach within to our better selves and seek the common ground of shared understanding and purpose. Goodwill need not wear a label, nor our neighbor be seen through a lens defined by politics, gender, color or faith. This is the true strength of America; that out of the ashes of the World Trade Center, the Pentagon or the soil of Pennsylvania, our collective spirit emerged, lifted, hopeful, enduring. May this continue to be the triumph born out of tragedy. We owe it to those we lost, and we owe it to those who will follow us. America’s greatness cannot be vanquished.”