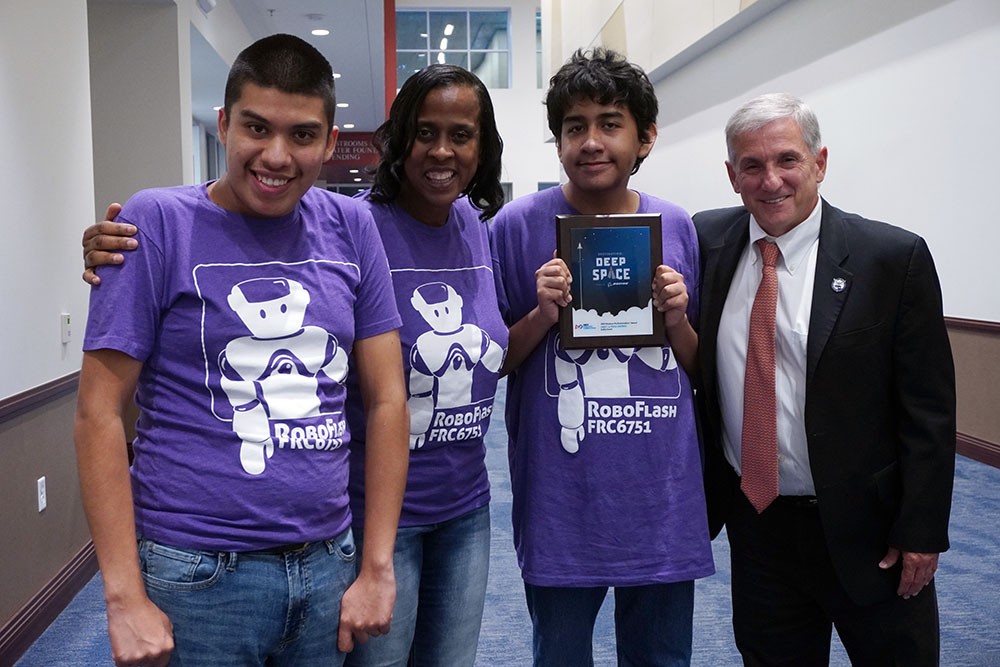 A team of 23 high school students with special needs earned a standing ovation for winning a sportsmanship award during a district robotics competition.

The Dallas ISD Board of Trustees led the applause for Sunset High School’s RoboFlash team, which earned the Gracious Professionalism Award during a robotics competition in March.

“I think teams are seeing that our team is one to be reckoned with,” said Pauline Tatum, special education teacher at Sunset High School and the RoboFlash coach.

For Inspiration and Recognition of Science and Technology (FIRST) is a national nonprofit that works to spark the youth’s interest in engineering through robotics competitions and other hands-on activities.

For the first time in history, a standalone team of students with special needs won the Gracious Professionalism Award, Tatum said. This prize rewards those who “compete like crazy, but treat one another with respect and kindness in the process,” according to FIRST’s website.

The RoboFlash teammates are part of an after-school robotics club where all students have special needs. Gabriel Reyes, a 14-year-old incoming sophomore who falls along the autism spectrum, joined the club at the beginning of his freshman year.

His family wasn’t convinced about letting him join the club at first, said Cristal Gonzalez, his older sister. Gabriel was shy and struggled to socialize, and his mom and sister feared that he’d be pushed too far too fast.

“In middle school, he never participated in anything like that. But after joining, I actually saw him coming home and talking to us about the stuff that they did after school,” Gonzalez said. “It got him out of his shell, made him express himself more and boosted his morale. It’s something that we’d never seen in him.”

Tatum, Reyes and senior Josh Preciado talked about the team’s latest accomplishment during the June 27 Dallas ISD Board of Trustees meeting.

“When [the team]won the award, Gabriel really felt proud of himself,” Gonzalez said. “He called everybody, our aunt, our uncle and mom, because she was still at work, and told them ‘I won, I won.’ He wanted everybody to know.”

Tatum has been teaching at Sunset High School for almost 20 years. On 2017, RoboFlash debuted at the FIRST Robotics Competition, contesting against the general education population. The participants build their own robot, and earn points depending on how well it can perform specific tasks.

During the tournaments the teams compete against each other in alliances with others. Not only do the students get assistance and guidance from their peers in the general education population, but also get a sense of acceptance. Just this year, RoboFlash improved their score from last year, which lead them to rank as the 150th among all 183 teams across the state.

“We are opening the doors for the kids with special needs to compete alongside the general education cohort,” Tatum said. “They engineer with their minds and build stuff with their hands. It might take them double the time, and sometimes triple the time. It takes them longer, but once they get it, they get it.”