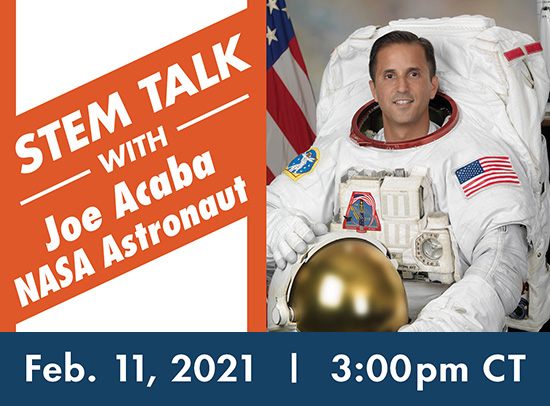 Join us for a STEM TALK with Joe Acaba, NASA Astronaut!

Joe Acaba Bio
Joseph M. Acaba was selected by NASA in 2004. The California native has logged a total of 306 days in space on three missions.  In 2009, Acaba flew aboard STS-119 on the Space Shuttle Discovery to the International Space Station to deliver the final pair of power-generating solar array wings and a truss element.  During this mission, he conducted two spacewalks.  In 2012, Acaba flew aboard a Soyuz spacecraft to the space station where he worked as Flight Engineer for the Expedition 31/32.  During this mission, the first commercial resupply spacecraft, SpaceX Dragon, arrived at the station.  Acaba recently served as Director of Operations Russia in Star City supporting crew training in Soyuz and Russian Segment systems. Acaba most recently served as Flight Engineer on the International Space Station for Expedition 53/54.